The glad news of the end of the hostilities became known in Hatfield about midday on Monday (11 November)…..a well attended meeting was held at St Audrey’s at which the Rector presided and the arrangements were made for the holding of an open-air thanksgiving service on the following day”…..”At one o’clock the procession began to move off….flanked by crowds of townsfolk and large numbers from the out-lying districts and with due solemnity and decorum moved up Fore Street, past the parish church where the bells were ringing out such a joyous peel as had not been heard for more than four years, and lined up in the great quadrangle at Hatfield House.
(Information courtesy Hatfield Answers the Call 1914 – 1919 Written by Brian G Lawrence, Researched & Compiled by Christine & Derek Martindale) 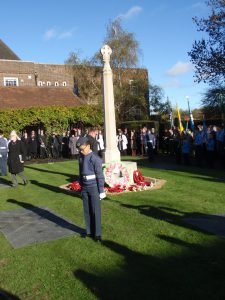 Service at the Memorial Garden At 11am

On Sunday 11th November 2018, Hatfield remembered 180 of their sons who gave their life in the Great War of 1914-1918. The project, which took a year in planning, was managed by: Hatfield Town Council, Gascoyne Cecil Estates, the Royal British Legion Women’s Section, St Etheldreda’s Church and many other organisations. Three remembrance services, to mark the signing of the armistice on 11th November 1918 were held followed by the lighting of a beacon of peace in the evening.

The first service, at the war memorial in Hatfield House, was at dawn. A good crowd turned out of 60+. Led by Father Darren Collins, it included readings from Lord Salisbury.

10.45am a parade starting from the Red Lion Pub traffic lights on Great North Road, marched to the Memorial Gardens, opposite the station. The service there was led by Bishop Stephen Venner and attended by local dignitaries. Representatives of a wide range of Hatfield service providers laid wreaths after the service. The memorial garden was filled to capacity and the congregation was banked back outside, right over to the station. 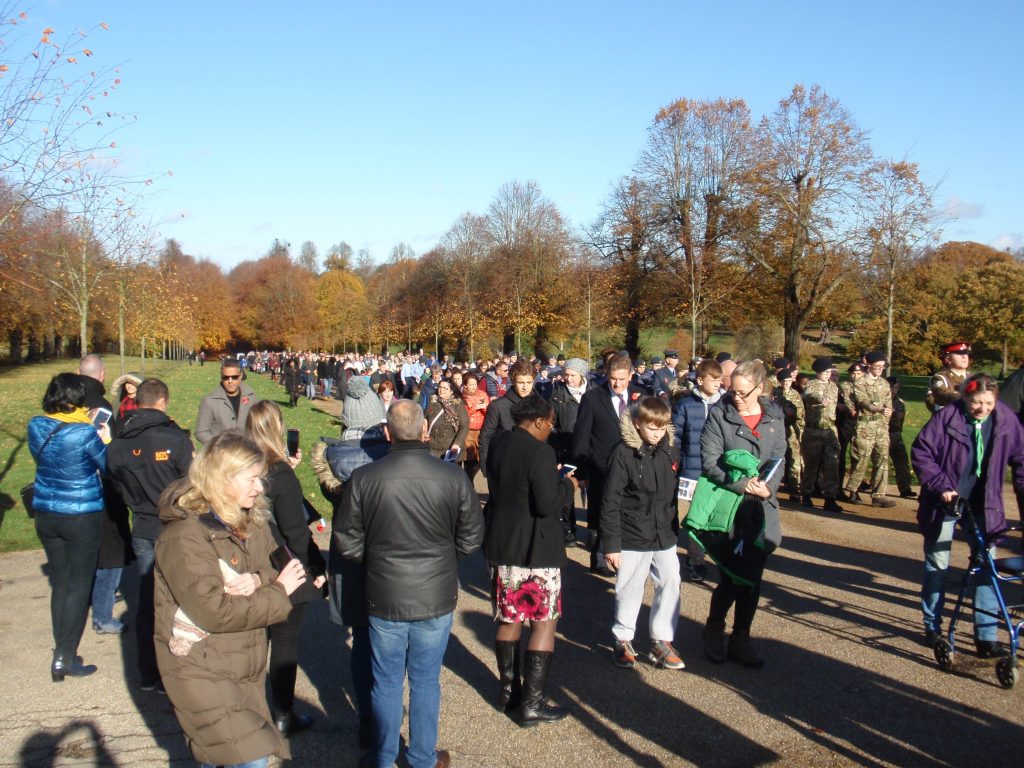 where a further service was held from the steps at the north front of Hatfield House. This was a re-enactment of the Great Thanksgiving Service held there after the signing of the armistice in 1918. It included the hymns that were sung at the 1918 service, and was led again by Bishop Stephen, Lord Salisbury and Father Darren. The congregation was invited by Lady Salisbury to take refreshments afterwards at the Riding School. 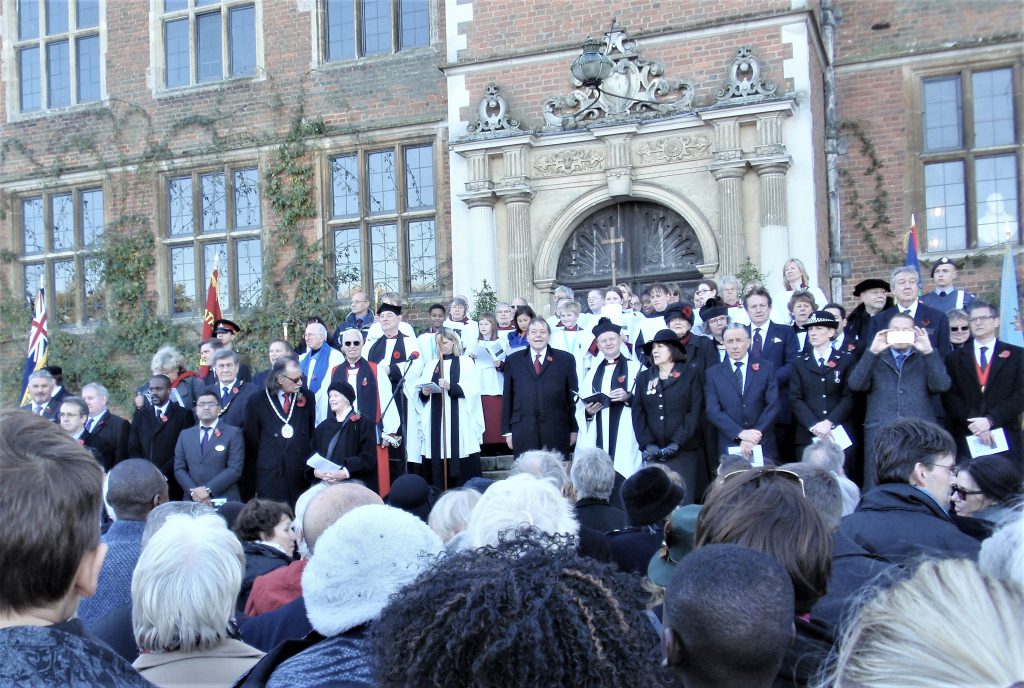 Service held on the steps of Hatfield House

It was estimated that 1000+ were in attendance on the day, it was a deeply moving occasion and good will prevailed. Afterwards people mingled in the Riding School, talking of the changes the war had brought about, and how well the loss of our Hatfield sons had been honoured in the events of the day. The Hatfield Local History Society had an exhibition, with extensive information gathered over the years, of how WW1 had affected Hatfield and its people. It provided a good focal point for discussion. 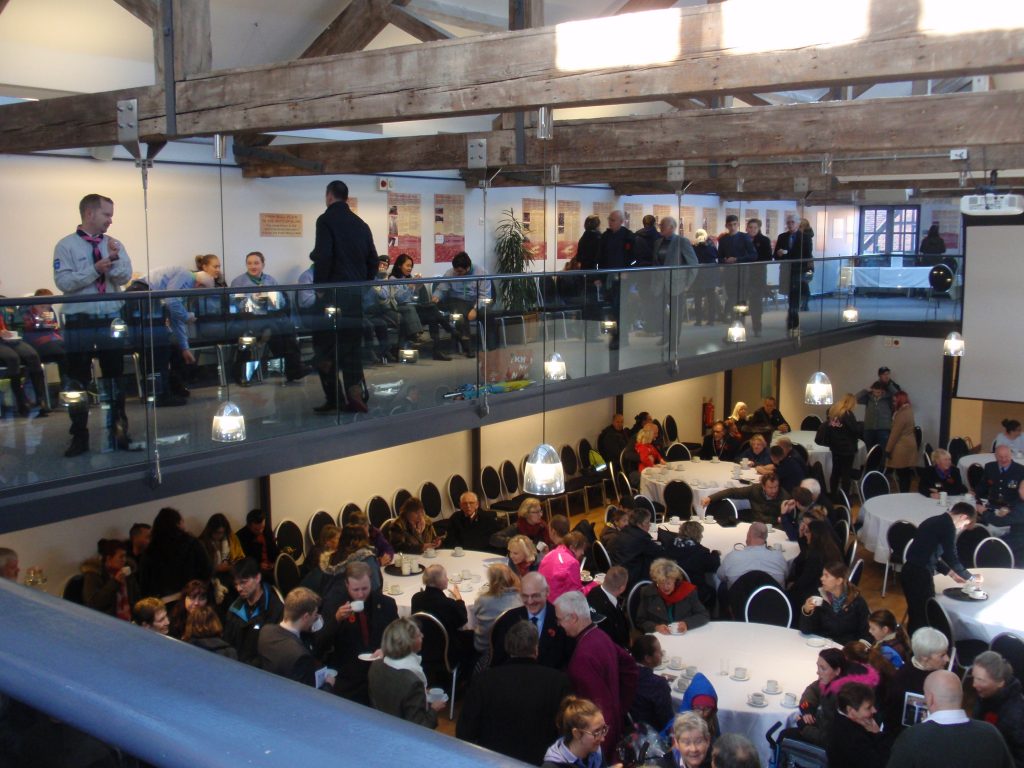 After the Service tea in the Riding School

At 7pm a beacon was lit within the grounds of Hatfield House, along with over 1000 others across the country, symbolising the light of peace that emerged from the darkness of four years of war. The church bells, which had not rung during the war, other than a chime at midday to remind people to pray for our forces, rang half muffled at the morning services, but were fully ‘open’ in celebration of the peace, as they were in the celebrations of the armistice 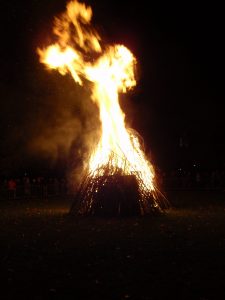